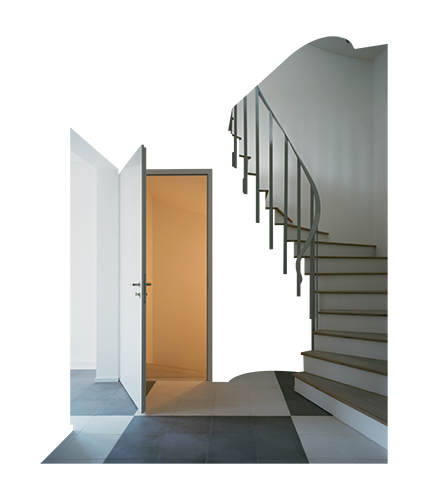 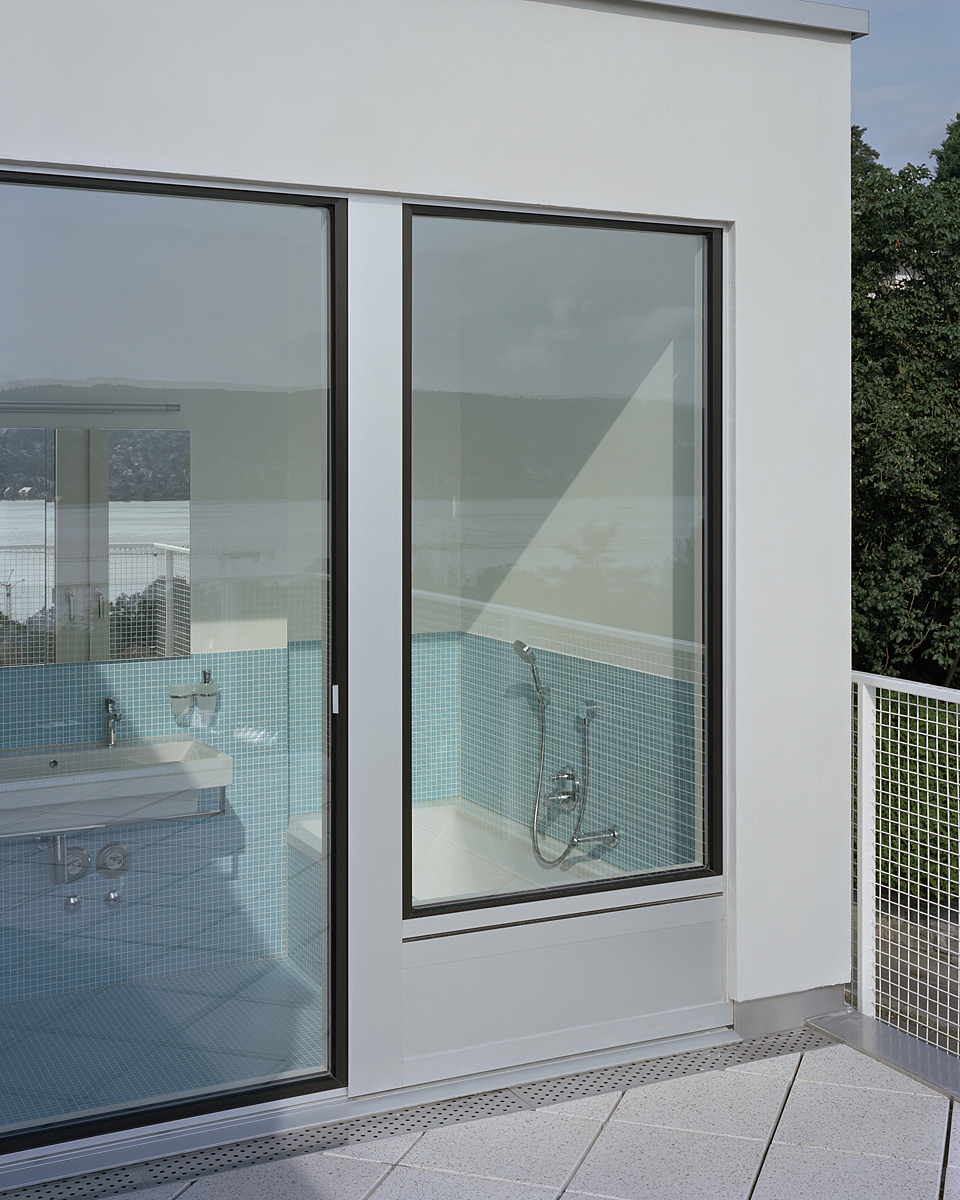 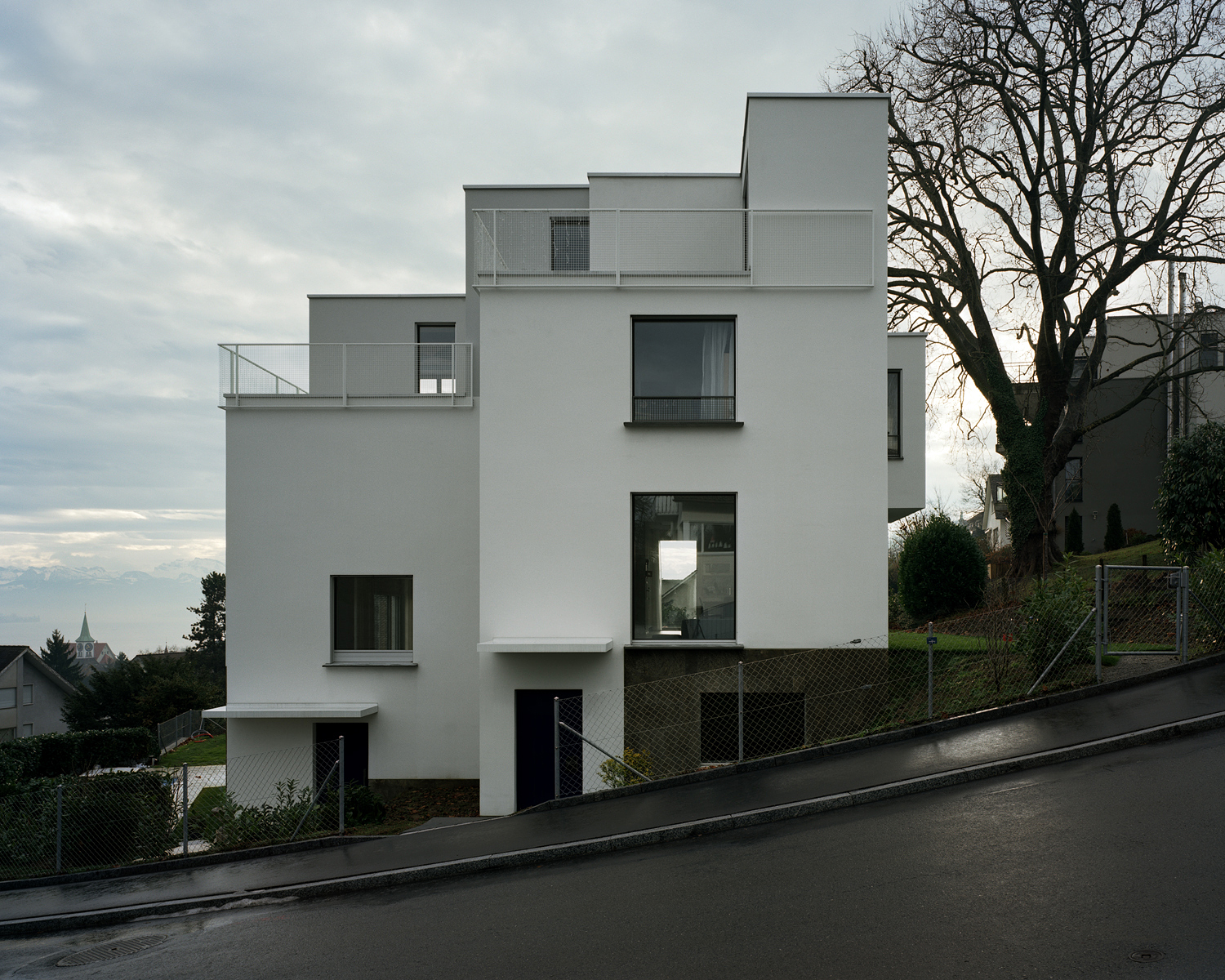 The semi detached house for two families is located on a small sloping plot outside of Zurich, overlooking the lake. 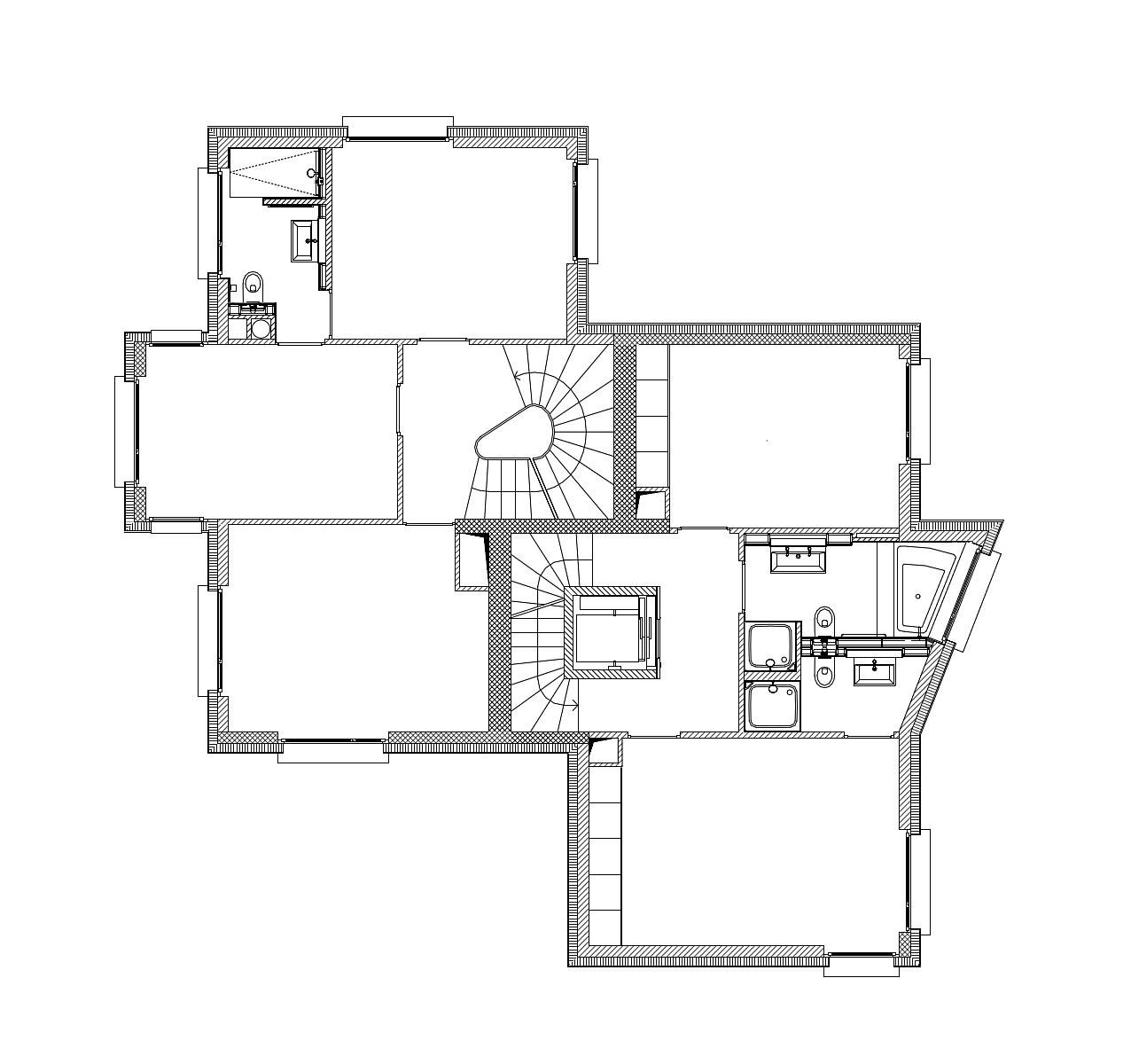 The prominent stairs give the small house a sense of generosity. 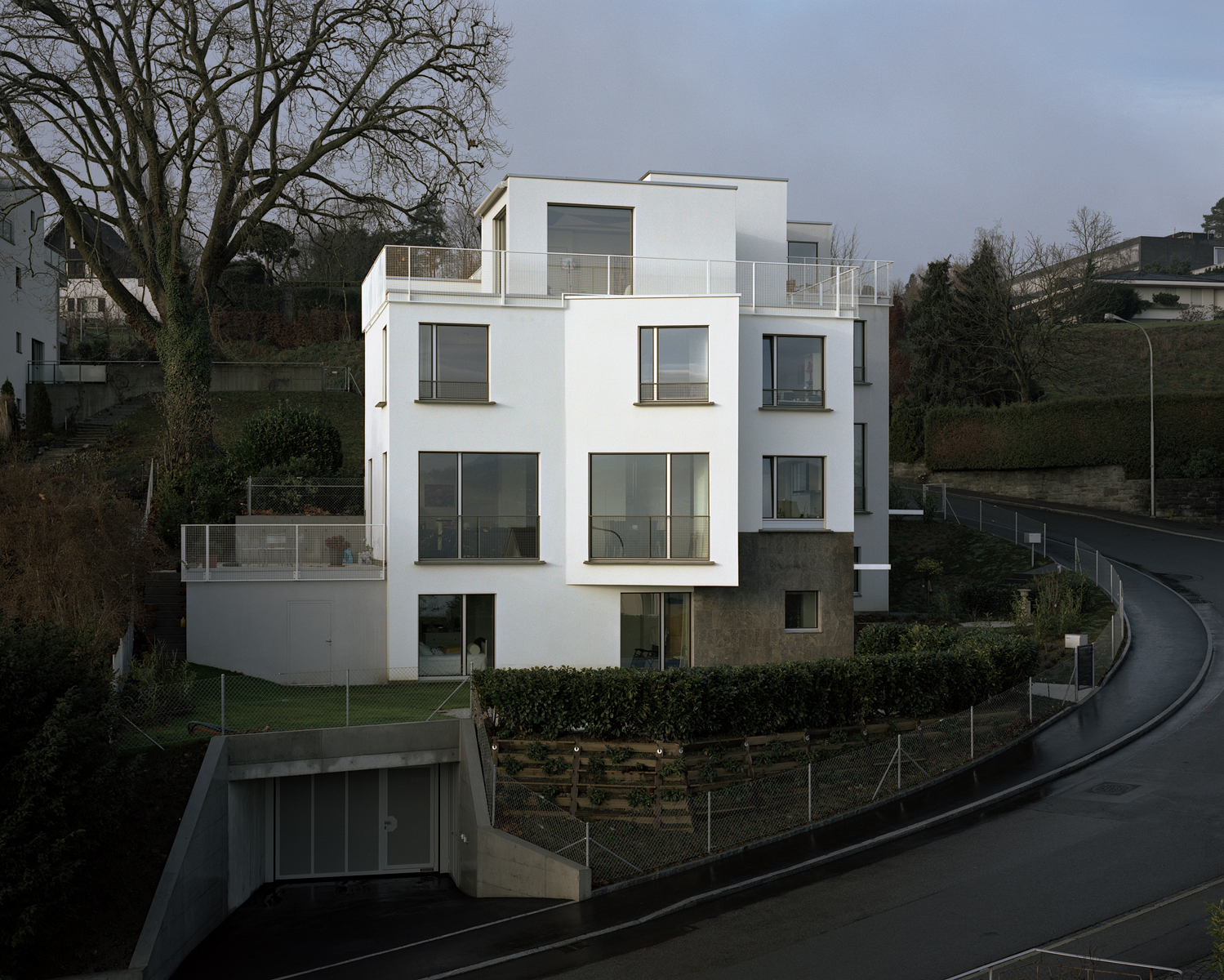 The facade‘s smooth rendering and the shallow reveals of its windows lend it an almost paper-like quality. 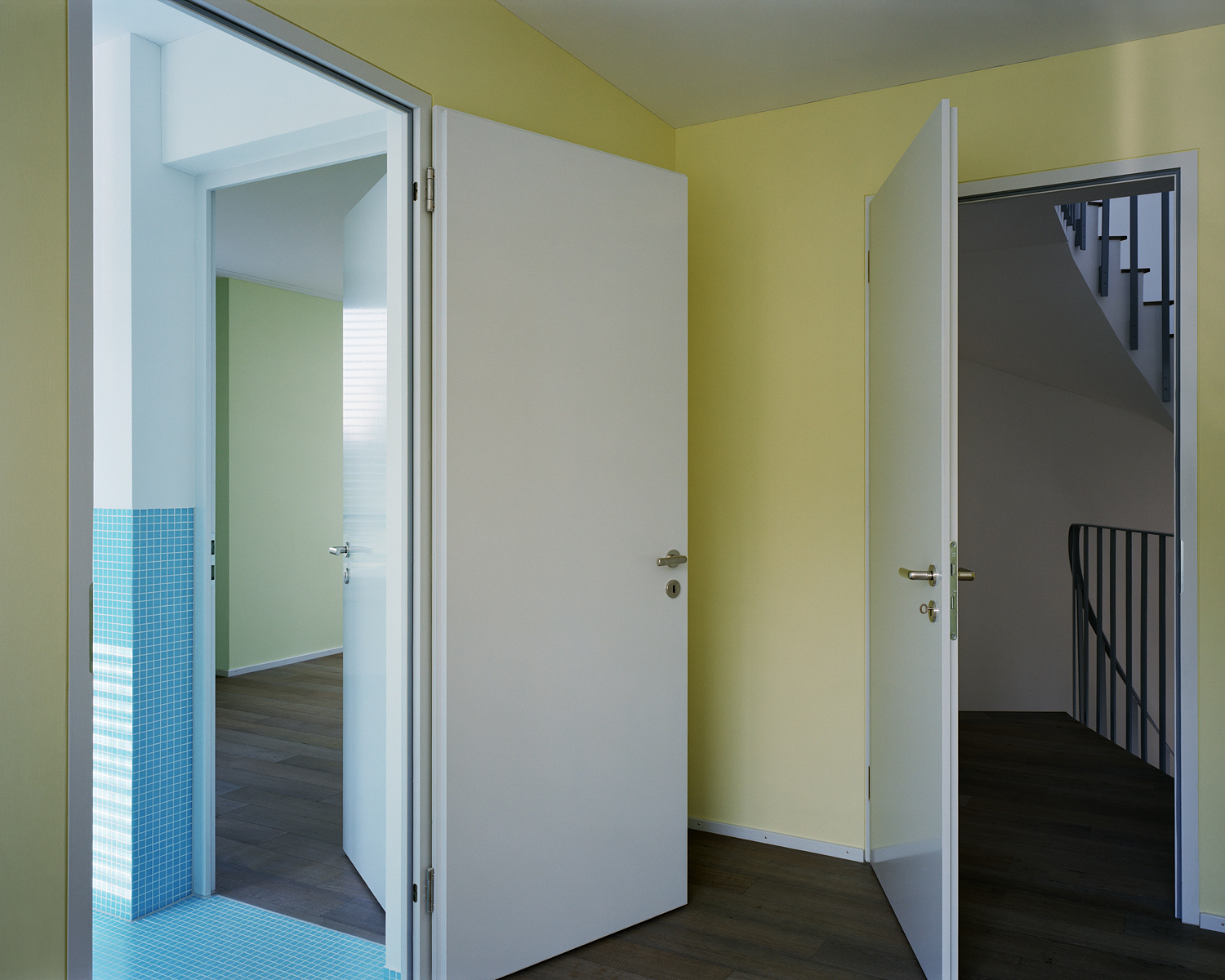 Inside, thin, membrane-like walls create an arrangement of rooms with carefully positioned doors allowing for graduations and continuity. 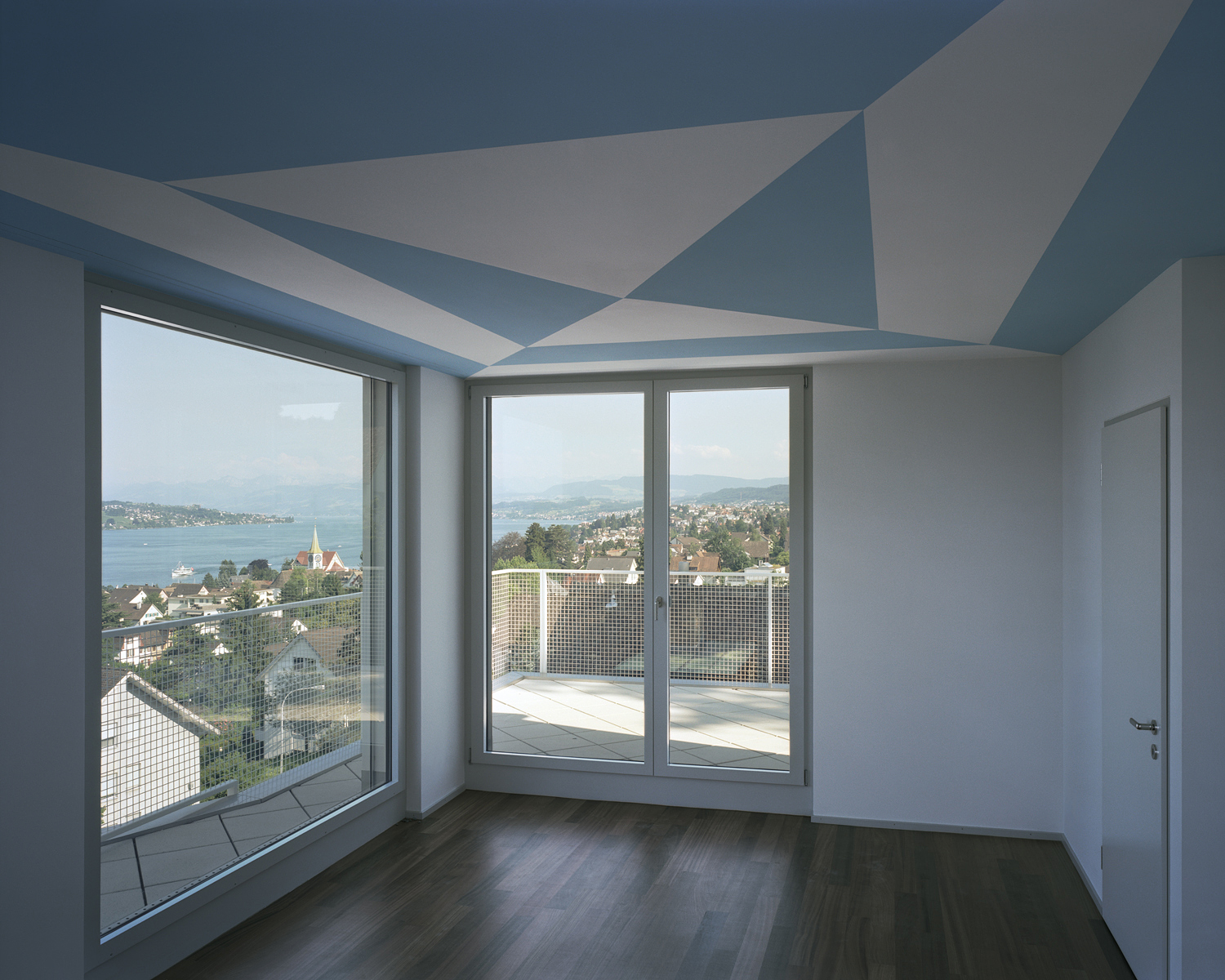 On the lake side, the house is crowned by a roof pavilion with a pyramid ceiling painted with a geometric design. 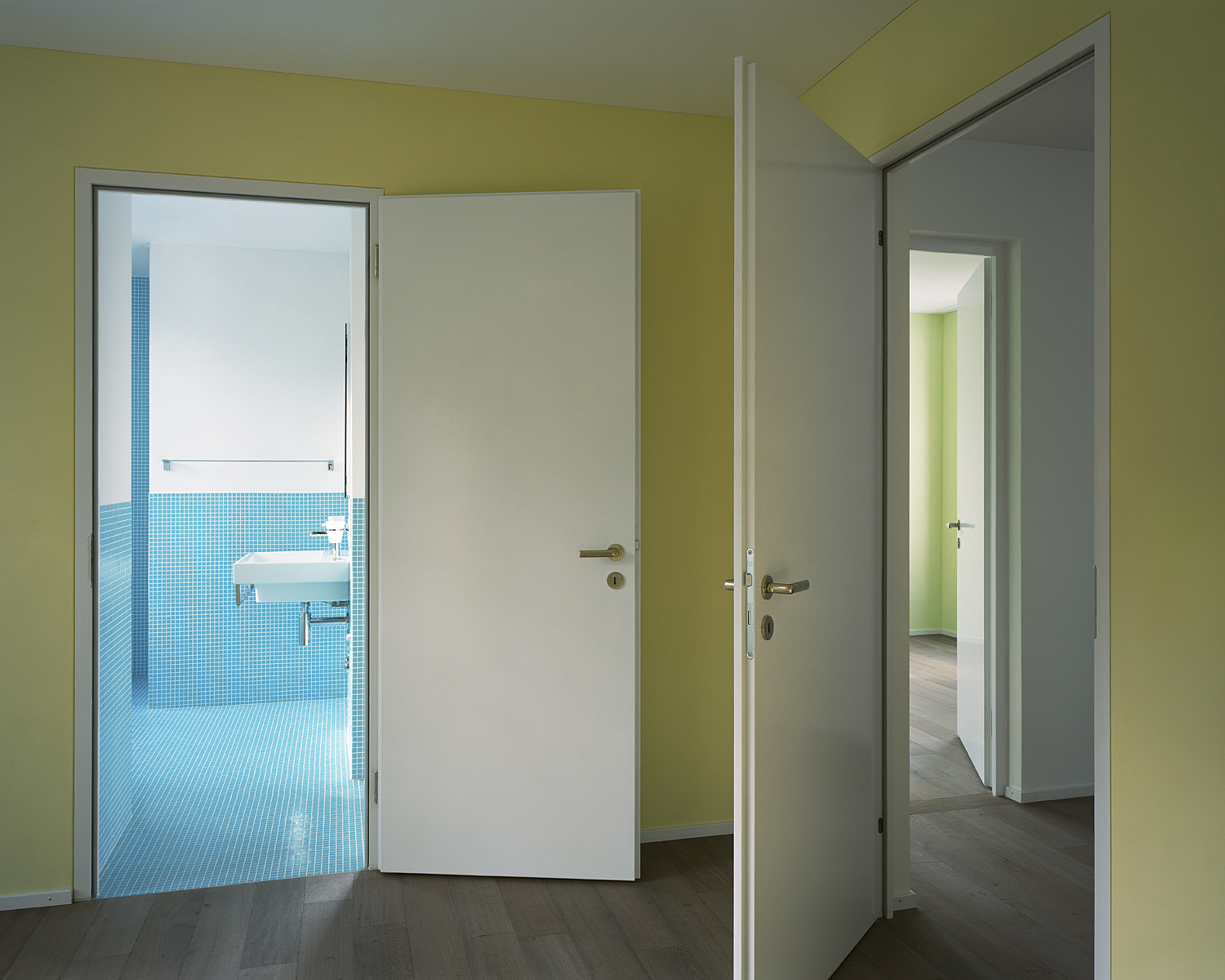 A multitude of doors interconnect the bedrooms, the bathroom and the stairs. 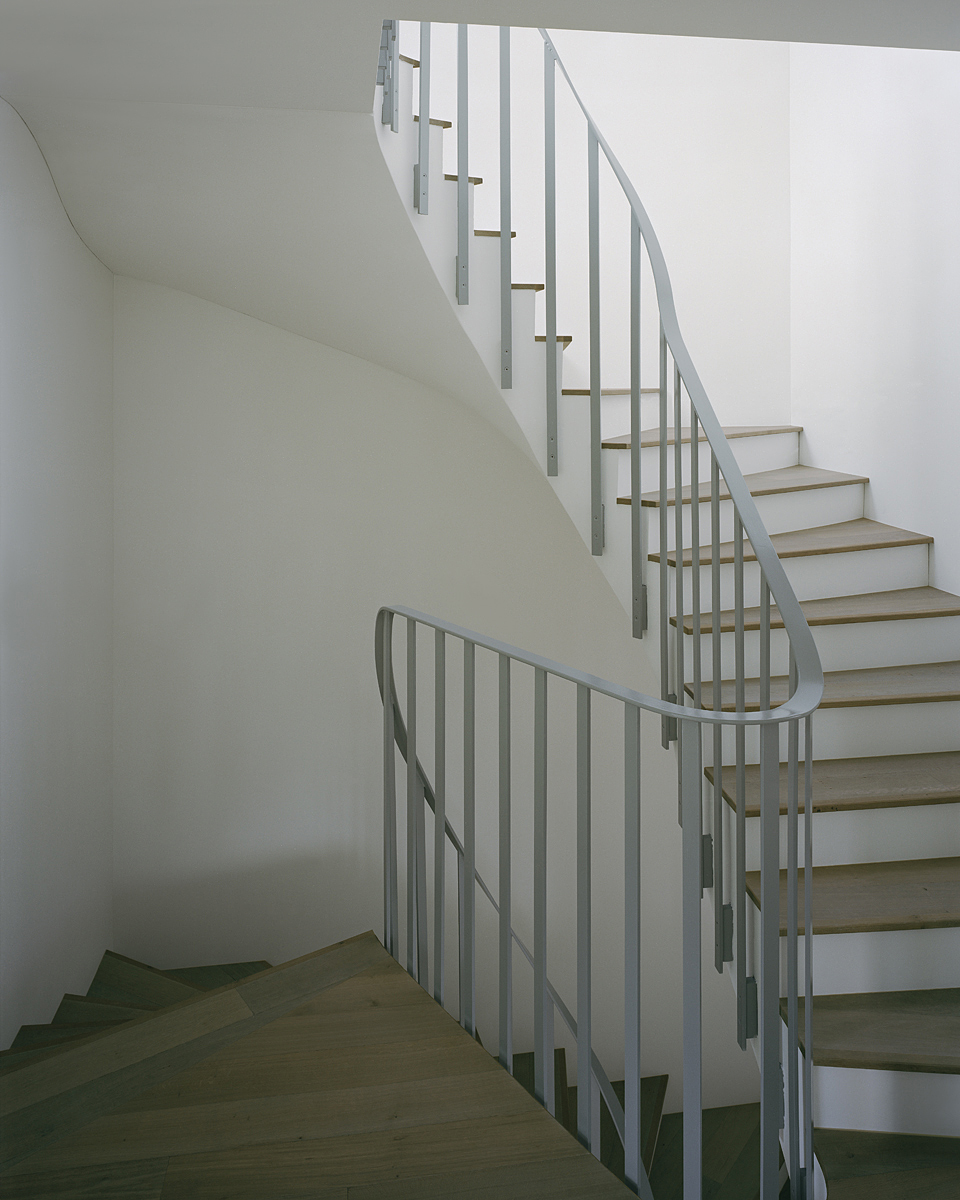 In a house with four floors, the generous staircase becomes the central element. 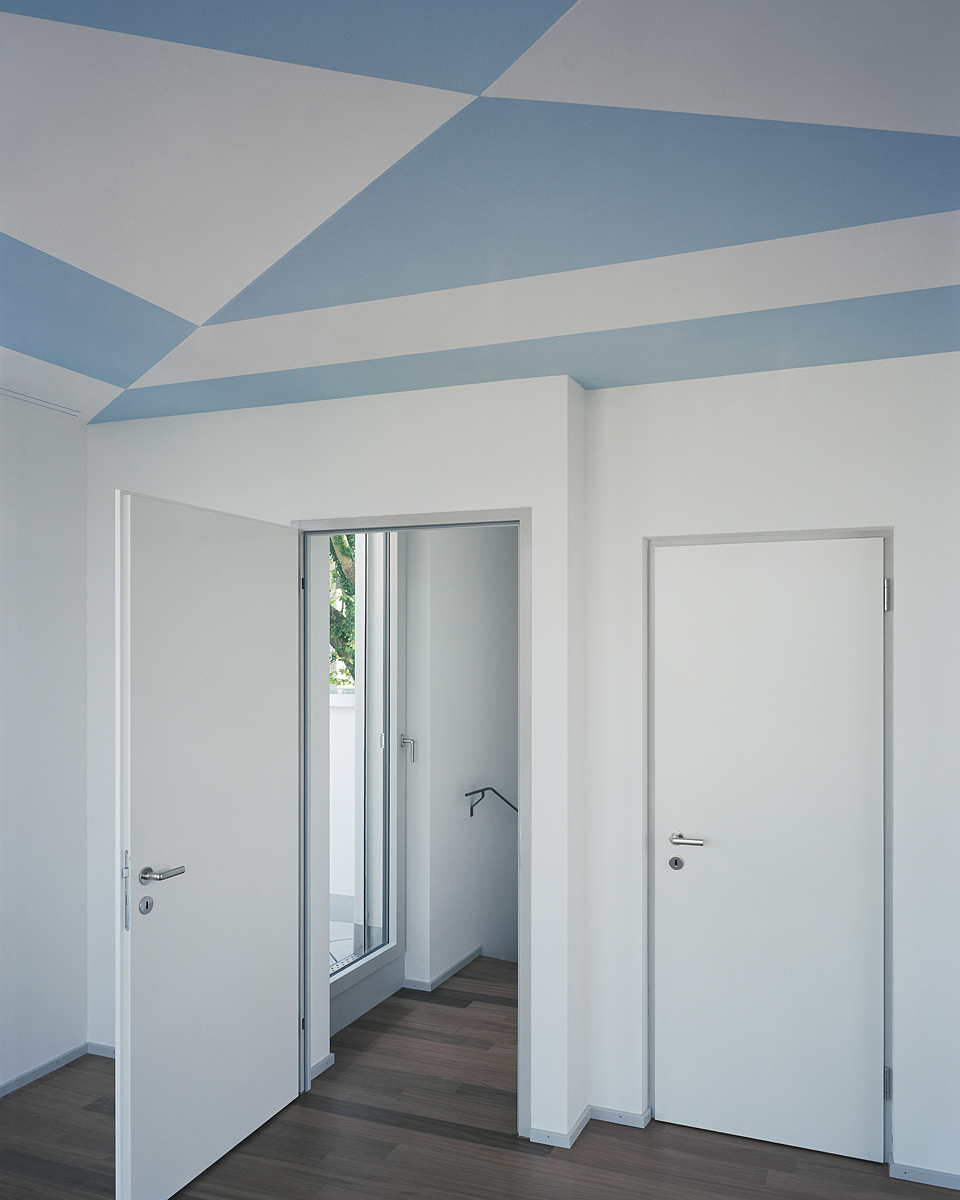 The geometrically painted ceiling emblematically marks the end of the staircase. 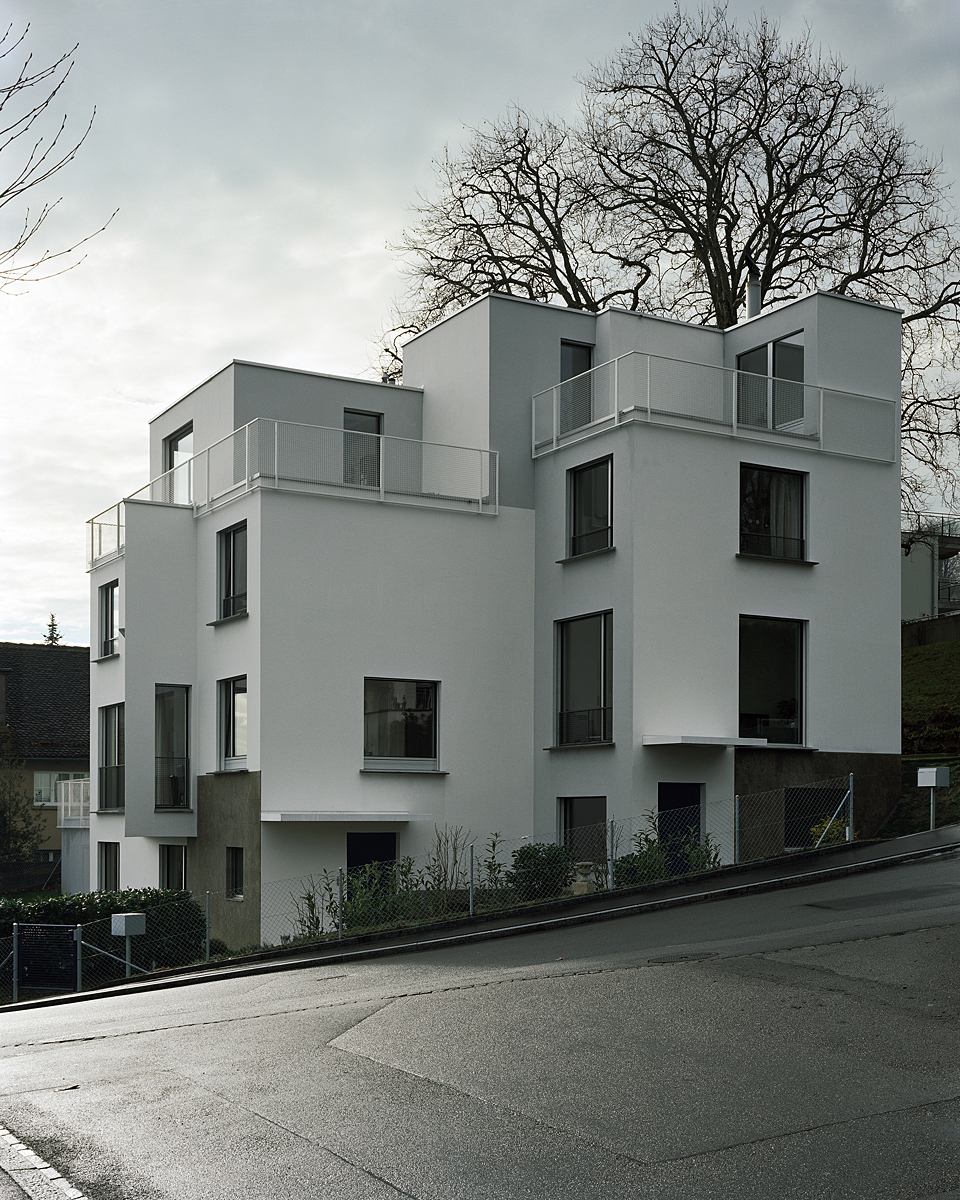 From an angle, the house’s precisely articulated facades appear as a plastic complex volume.

The brief was to build a two-family house comprising two adjoining dwellings on a small sloping plot overlooking Lake Zurich. On the uphill side the plot is shaded by an old plane tree while the lake side presents a panoramic view that extends from Zurich along the length of the lake to the Glarus Alps.

Due to the small plot size, the design process resulted in a staggered, tower-like, vertical structure of strikingly urban character, contrasting strongly with the surrounding detached houses from the 1950s.

An S-shaped dividing wall separates the building into two very different dwellings. Fortunately, the requirements of the two client families corresponded precisely to the benefits presented by each half of the site. While the house belonging to the older family faces the lake with a symmetrical aspect, making a grand formal statement, the dwelling of the younger family on the upward-sloping side presents itself on all sides as an informal, angular structure with a private garden beneath the magnificent plane tree.

The villa’s main façades are based on a triaxial window configuration while the windows of the front façades take on a symmetrical single-axis arrangement. This effectively creates a fundamental design framework that forms the basis for carefully planned individual design features.

One exception is a triangular bay window on the lake side which initially casts doubt on the symmetry of the façade – only to then form a balanced profile in combination with an asymmetrical stone socle area and counterweighted by a roof pavilion, thereby restoring the harmony of the overall appearance. The upward-facing and front façades are also characterised by this tension between symmetry and asymmetry. Here, too, an underlying “general urban” configuration is overlaid with specific architectural elements such as the asymmetrically positioned main entrances and natural stone plinth area.

On the lake side, the house is crowned by a roof pavilion with a pyramid ceiling. This is painted with a geometric design and centres the room, while at the same time opening up the view diagonally across the lake to the Alpine panorama.

The ceiling pattern is reminiscent of ship’s flags and veers between symbolism and pure pattern.